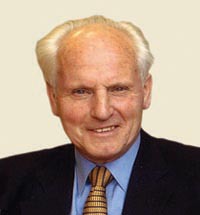 Dennis Norton (above) started his collection soon after starting work at the Austin Motor Co. in Longbridge, Birmingham, in 1949. Although most of his collection dates from between then and when it was transferred to the Bromsgrove District Council in 1992, Dennis has continued to add to it, and in the last few years has acquired a number of items to do with the Bromsgrove Guild, including over 2,500 glass negatives of their work. The items in the collection are very varied. With his background in the motor industry, there are many items associated with cars and, particularly, motorcycles. He became interested in music players, and there are a number of old gramophones and similar devices. Anything to do with domestic interiors of yesterday interested him, and in Upton Warren he fitted out a whole kitchen as it would have been 100 years ago. He also had a large collection of old cameras and cine projectors, and there are a number of old advertising signs in the collection.
Just a few examples are shown below, described by Dennis.

Banshee Motorcycle and Shoe: I was a member of the Vintage Motor Cycle Club in 1954 and it was my aim to find a Banshee Motorcycle for the collection, This motorcycle company was founded by Mr Jackson, an accountant in Hull, in 1919. The components came from the MIdlands and because of transport problems in 1920 the factory moved to an old nail warehouse in Crown Close in Bromsgrove. An experienced manager, Mr H Bell, was appointed; he introduced many changes and the company produced their own frames and many other parts. In 1923 Mr Jackson resigned and Mr Bell and three new partners took over and the company was known as ‘The Banshee Manufacturing Co. 1923’.
During the next few year the business prospered and employed five full time workers and a number of part time staff and it is believed that by 1928 when the company closed 750-800 machines had been produced. In the ’50s I heard about and viewed a Banshee in Yorkshire, and as it was an important part of Bromsgrove history I was keen to acquire it. After protracted negotiations I was the proud owner of a Banshee, and as far as I know there is only one other in existence. The magnificent aluminum brogue sidecar shoe was made in 1920 by local tinsmith Alf Morris, for Brightons shoe shop and was used to collect and deliver repaired shoes. 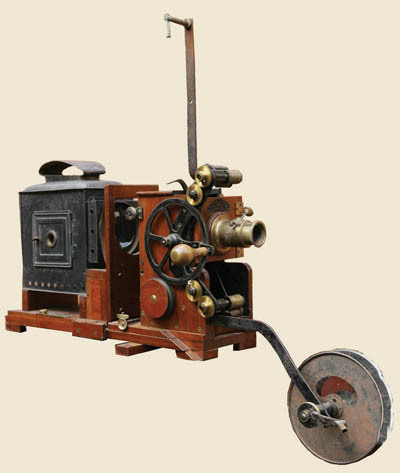 Primus Matagraph: This was a very exciting find for me and came as a result of a phone call from Mr Kenett of Churchfields; his grandfather had bought this machine for the first cinema in Halesowen, c. 1895. I realised it was a very rare magic lantern and projector combined and marked the transition from slide to film. I sent photos to the Science Museum in London for further information, but they replied that they had not seen one before and would I sell it! 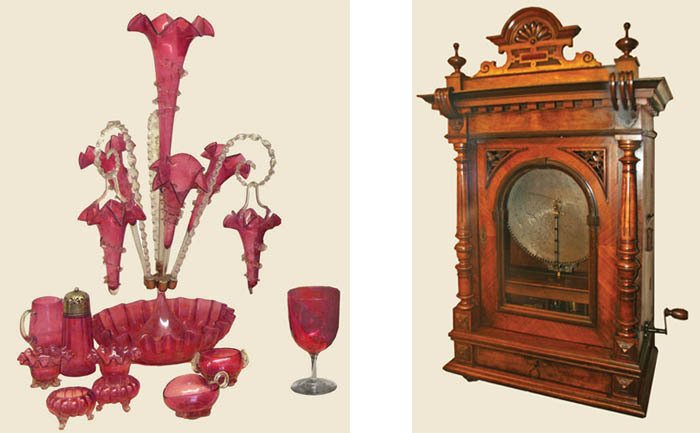 Fairfield Glass & Music Box
Many Fairfield and Bournheath families were involved in the glassmaking trade. The picture shows a selection of glass and a large disc musical box which was supplied to The Swan public house in 1890 and was played by the workers. In 1920 this form of entertainment went out of fashion and the musical box was given as a wedding present to a cleaner at The Swan who treasured it, but later I was able to buy this important item from her son. 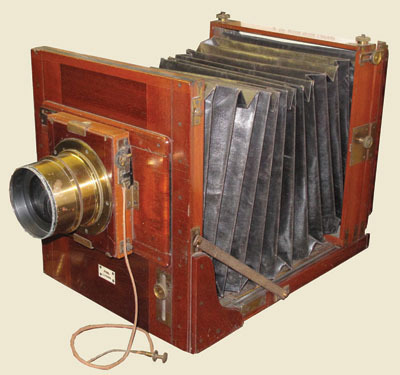 Camera: This large plate camera belonged to Sir Herbert Austin. It has a leather case with 2 lenses. When the chief photographer was clearing out his studio I was offered the camera as I was thought to be a ‘safe’ pair of hands. 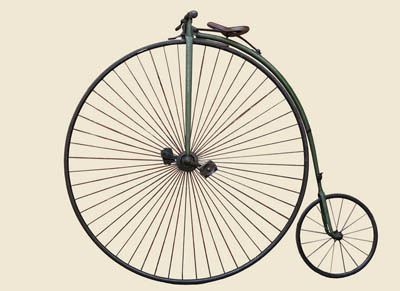 The Penny Farthing: This machine was the property of the owner of Bromsgrove Motors, and it would be in the showroom at Christmas decorated with fairy lights. I was very attracted to this machine and for many years tried to buy it, but it was not until it turned up in Stourport owned by a Mr Freegurd that I was able to acquire it and bring it back to Bromsgrove. In the 1950s I did a sponsored ride to Worcester and back on it, but I prefer more comfortable means of transport today! 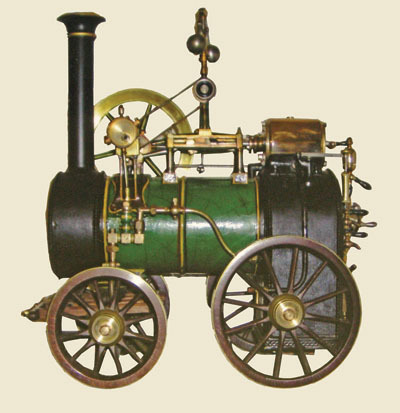 Portable engine: This working model of a portable steam engine was made in Bromsgrove by Samuel Ball (who later worked for the Bromsgrove Guild) in 1875. These engines were made to drive farm machinery from the early days of steam in the nineteenth century, but were not able to move under their own power, and had to be towed from farm to farm. This model is about 14 inches long. When I bought over 20 years ago it I paid the value put on it by Christies – £400. 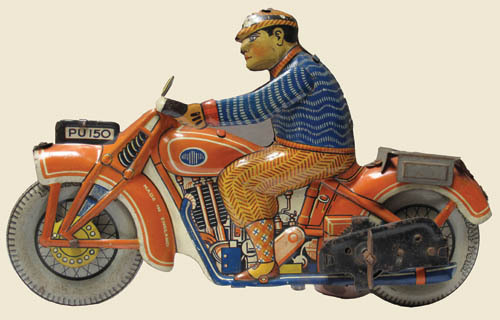 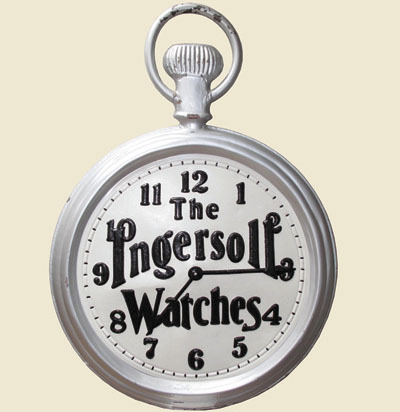 Ingersoll Watch: This hung outside the black and white timbered building, c.1910, on the corner of St John’s Street, which was Appleby’s the ironmongers. This is a fine example of the tin plate signs used to sell market products. 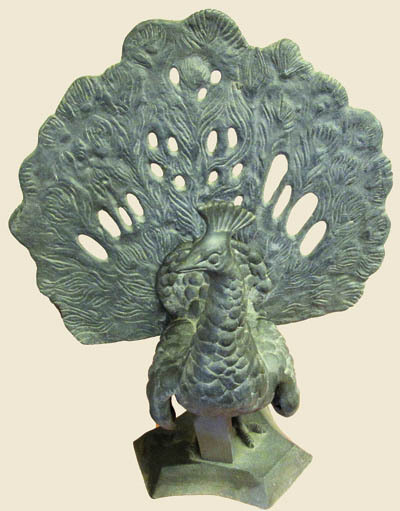 Garden Ornament: This cast lead garden ornament was made by Harry Hems, who worked for the Bromsgrove Guild before leaving to work on his own in the 1920s. 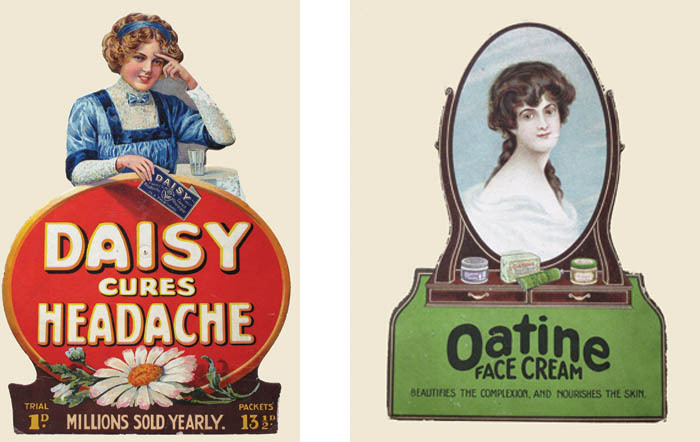 Daisy: A colourful and well designed advert for a tonic seen in the chemist’s shop

Oatine Face Cream: An early advert that can be seen in the chemist’s shop